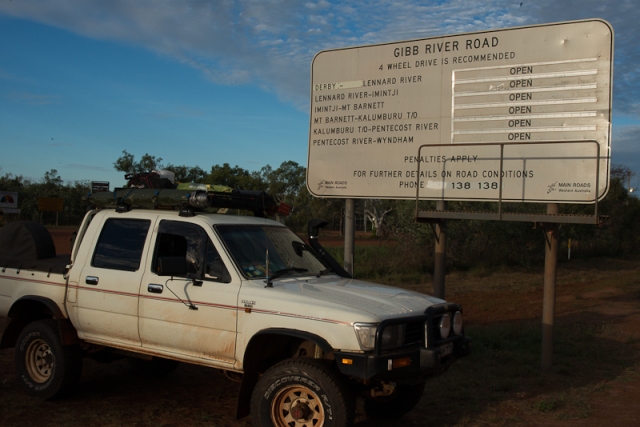 At the start of the road

As I previously mentioned, the Gibb River road is one of Australia’s best tours for any 4WD owner. Although you usually do not need to use 4WD on the main track, you do need a 4WD, and one with high clearance too, if you want to venture on the side tracks which may have a number of creek crossings depending on recent rainfall. The road is usually closed during the wet season, the track is just impassable then.
The reward for enduring hundreds of kilometres of corrugations and dozens of creek crossings is in the fantastic Kimberley scenery you will see. The waterholes and waterfalls might be described as beautiful, but that would be too soft, too feminine for most of the Kimberley …. dramatic, harsh, awesome, might be a better choice of adjectives.
Day 1 Broome to Lennard river
Before leaving Broome I thought that I had better stock up on groceries, so off to Woolworths I went, only to find when I got to Derby that it too now had a Woolies. I think much of their business would be from people stocking up before or after travelling the Gibb River road, there cannot be enough residents in Derby to support a big supermarket !
Derby’s main claims to tourist fame are it’s huge tides (11m+, apparently the second biggest in the world) and the prison Boab (prisoners were kept overnight in the hollow trunk!), but they should also publicise what must be close to the best fish and chips in Australia. If you are ever in Derby, go down to the jetty and try them. You can sit in the restaurant and watch the sunset, or pay half the price and get the same food to takeaway and sit in the park to watch the sunset… guess what I chose!
Then it was back on the road, heading down the Gibb River road. The bitumen lasts for about 60km, then it is dirt for the next 600 and more. It’s not wise to travel on this road after dark, it is mainly unfenced and even with the best driving lights and a bullbar you will come off second best if you hit a Kimberley scrub bull! So as soon as I reached a decent campsite at the Lennard River rest area I pulled in for the night.
Day 2 Lennard River to Windjana National Park

First side trip was to the Windjana Gorge, which is actually the remnants of a huge reef system from billions of years ago when the area was under the sea. Even with millions of years of erosion the cliffs are still up to 200m high, so it would have been an incredible drop-off way back then !

one of the locals !

Nowadays the river through the gorge is home to dozens of freshwater crocodiles, a lot less dangerous than the saltwater type further north. I would not be getting this close to them !
I camped at the National Park campground that night, then drove on the next morning to Tunnel Creek. The Windjana gorge district was also the scene of a darker part of Australia’s history, when pastoralists drove the local Birubi tribe from their land, killing or imprisoning those who resisted. Jarramurra, or Pigeon, was a local Aboriginal stockman turned police tracker who eventually changed sides and waged a 3 year guerrilla war, hiding out in a tunnel through the hills, Tunnel Creek, where he was eventually found and shot.
Then it was back to the main road, and a bush camp at March Fly Glen for the night. Despite it’s name there were no annoying March Flies, it was actually rather nice, next to a stream filled with water lilies.
Day 3 saw me arrive at Silent Grove, the campground for the King Leopold National Park. Like the one at Windjana this was good value, $11 for a nice shady campsite, decent toilets, solar heated showers and plenty of spring water on tap. The river, gorge and waterfall is another 11km down the track, a rather bumpy one too ! 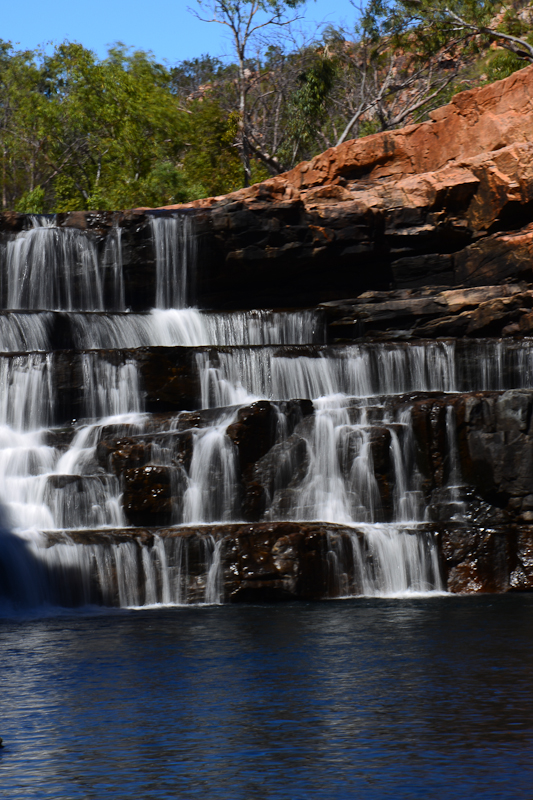 Despite the tropical latitude, the water was COLD ! A quick dip was enough for me, but all the foreign visitors seemed to think it was ok ….normal water temperature in Europe perhaps ? LOL. The place was full of tour groups on the first visit that afternoon, so I got up early the next morning and returned to try and get some photos without people walking in front of the camera : 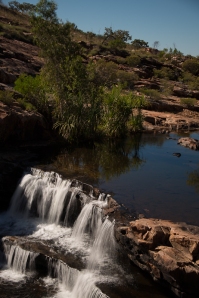 When the crowds started to turn up it was time to hit the road again, on to Mt Barnett, but that can wait for the next post, this one is long enough already.

A recently retired "Baby Boomer" , looking forward to having more time for my photography and travel.
View all posts by Mike →
This entry was posted in Australia, Landscape, Photography, Travel and tagged Australia, Gibb River Road, kimberley, National Parks, outback. Bookmark the permalink.

5 Responses to The Gibb River Road