As you will have read from the last couple of posts, I have been up north lately, mainly for the Phi Ta Khon festival held last week in Dan Sai, in Loei province. This festival has been held for hundreds of years so it’s origins are not 100% certain but it is believed to be at least partly a celebration about a story of the Buddha’s previous life as an Indian prince when he went travelling for a long time and was feared dead. When he returned alive the celebrations were so loud that they supposedly woke the dead and the spirits joined the party. Add in some fertility rites to mark the start of the rainy season and rice planting time and some ancient animist spirit worship and you have Phi Ta Khon.

The festival goes for 3 days, and starts well before dawn on the Friday when the town’s head spirit medium invites the spirit of Phra Upakod ( a monk who chose to transform himself into a lump of marble in the river, so he could meditate in peace !) into town, followed by all the “ghosts”. 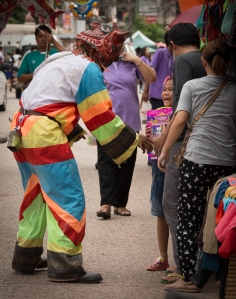 On the Friday they roam around town, occasionally scaring little children and often eliciting giggles from the girls with their phallic appendages and accessories.

I guess it beats their monastic studies ?

Meanwhile in the town’s main wat there is traditional music and dancing, and Phi Ta Khon themed shows by local schoolchildren, watched over by parents, the usual local dignitaries, and the monks ….hmmm, I thought they were supposed to renounce those sorts of earthly pleasures ?

And material possessions such as video cameras ? No, not nowadays, as anybody who has been into Bangkok’s Pantip Plaza would have noticed.

Friday night was concert night at the night market..if you don’t like loud morlam music stay away, otherwise join the locals for the big party night of the year. The big parade is on Saturday morning, starting at 10.00 and running for about 2 hours. It would probably have been less if people did n’t keep running out in front of a float to get another selfie for Facebook ….Thais really love their selfies !

Never mind if they hold up the parade, or get in the way of somebody else’s photo or video, Facebook comes first.

Each of the villages in the parade had their own giant Phi Ta Khons, very evidently one male, one female ! Until recently only males wore the phi ta khon costumes while the females dressed in white and marched at the head of their group, but nowadays younger females also dress up as spirits while the older ladies stick to tradition.

Apart from the “ghosts” there are also floats depicting farm life, fishing in the river and local hill tribes.

After the parade it was time for Thais’ 2 other favourite pastimes besides selfies …eating and shopping.

Later in the afternoon comes the traditional firing of homemade rockets, but it was pouring rain by then so I did n’t stick around for that. I did stop and watch the final assembly of one group’s rockets ….plastic tubes, bamboo, vines and gunpowder ! Not as big as the rockets at other “Rocket Festivals” around Issaan but I’m glad nobody was smoking !

Saturday night and into Sunday is time for a non-stop reading of Buddhist scriptures, which is supposed to bring you a better rebirth into the next life if you sit through the whole lot

A bit of a contradiction to the previous 2 days of drinking and ribald fun perhaps ?

Some more photos (click to see a larger version): 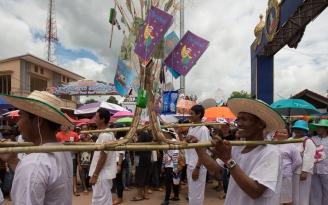 No, I don’t know why there are Christmas cards on this money tree 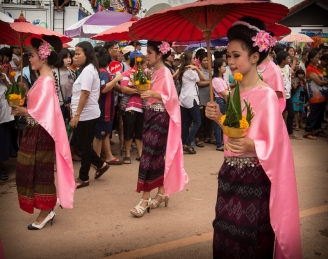 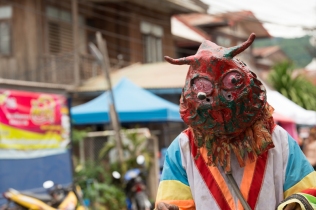 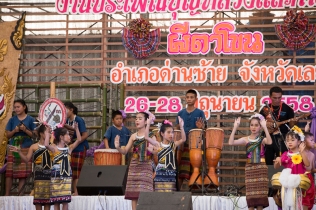 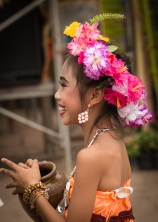 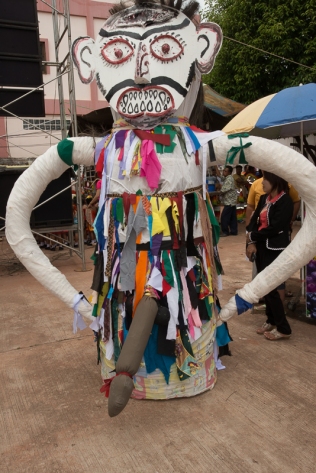 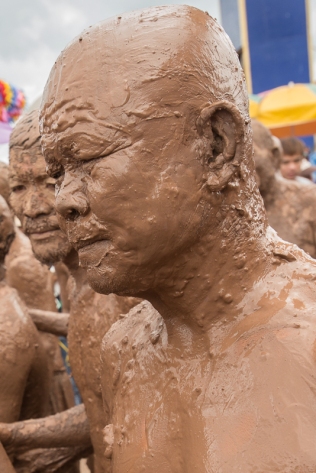 When, where, and how to get there.

The annual date is set by the town’s spirit medium, but usually falls on a weekend in late June. In the past it was only announced shortly before the event but the tourist baht has persuaded them to give more notice nowadays. Dan Sai is in Loei province, near where the Laos border dips south into Thailand. There is a bus from Loei to Phitsanolok that passes through town, but the best way to get there is with your own wheels. I flew to Phitsanolok with Nok Air and got a good deal with Thai Rent-a-car thrown in. There are “resorts’ in Dan Sai but they book out early,  so I stayed in Phu Ruea where there are many places to choose from and it’s an easy drive from there to Dan Sai. The traffic getting out of Dan Sai on Saturday was horrendous though, make sure you park somewhere on the way out of town in the direction you are headed. I made the mistake of parking on the way in, and could not do a u-turn so had to go through town before turning around to join onto the end of a 1.5km long traffic jam !

Although Phi Ta Khon is not really promoted to foreign tourists if you go you probably will not be the only farang there, I saw about 15-20 white faces over the 2 days of the festival. You won’t find much English spoken but you’ll survive …your biggest problem might be politely refusing yet another can of Leo