How would you feel if…. 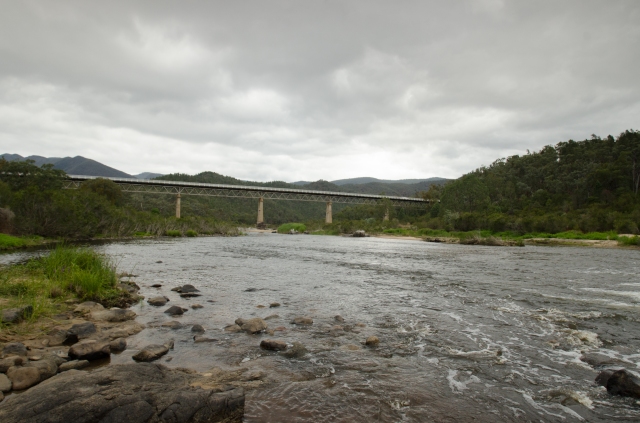 MacKillop’s Bridge stands well above the Snowy River now, but it was not always so.

How would you feel if you built a bridge well above flood height, then watched it get washed away by a record flood only days before the official opening?
I’ve driven down to the NSW South Coast, via the Barry Way and Snowy River Way, then across MacKillop’s Bridge. Nowadays the bridge stands well above the Snowy River, as most of the river flow is diverted through the Snowy Mountains Scheme to flow inland for irrigation, but when this bridge was built in 1935 the river ran wild.
The builder constructed it to be 10 feet (3 metres) above the record flood height, thinking that was safe margin. But only a few days before it was to be officially opened along came a flood well over that margin, and washed the roadway away ! 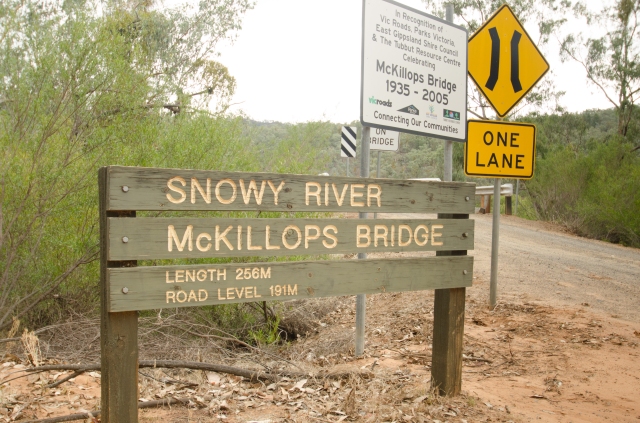 They rebuilt the roadway, adding another 5 metres on to the pylons “just in case”. Looking at it now, it is hard to imagine all that extra water coming down the valley. I rafted down the river from here about 20 years ago, and in the 50+ years since the river was dammed at Jindabyne vegetation has grown over what would have been the river banks and are now high above the river. 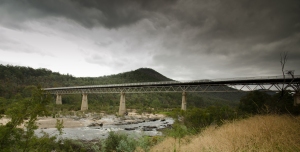 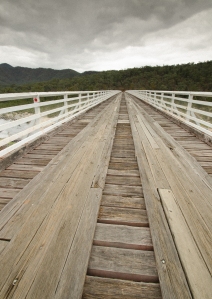 On a side note, the Victorian section of the Barry Way/Snowy River Way must rank high among the scariest roads in Australia. It is narrow, only just over 1 lane wide, twisting it’s way up and down the hill sides with a rockface on the “safe” side and a vertical drop on the other side, way down into the valley below. I was dreading another vehicle coming the other way, and having to find someway of getting past !
So now I am down in Eden, on the south coast, heading towards Victoria. I’ve never been down here before, so it is all new to me. The last 2 nights I’ve camped in National Parks, and once again I am confounded by their pricing policy. At Mimosa Rocks they charged $10 for a small campsite with pit toilets, yet at Bournda they charged the same for one with hot showers and a laundry ! I did get a lecture from the ranger at Bournda for not prebooking online, but the leaflet in the local tourist office said that was only necessary at Christmas and Easter holidays. I pointed out that out to the ranger, and that they were hardly overcrowded, as there was only 3 or 4 other campsites in use, but he still wanted me to get online and book ! I also noticed that quite a few people came in late and left early, I bet they did not prebook or even pay …..

1 Response to How would you feel if….