The Police knew better though :

At our local wat

Just a couple of phone photos from my morning walk out to a local forest wat, where they have a large number of adenium (aka Desert Rose) and other plants potted around a large chedi.

In Thailand you often see a white cord tied around a person’s wrist, or tied to a new building, or a new car ! This is a form of blessing, wishing for good fortune in the future.

The other night we were at my eldest sister-in-law’s house when she began hanging white cord around the house, when I asked what was happening the missus tells me her sister wants good luck because so many people she knows have died. Indeed, during the 4 weeks or so of cool weather that passes for winter here my wife and her family were going to at least one funeral a week. I don’t know if it is normal practice all over Thailand but the local wat baan lets off firecrackers just before every cremation, so every couple of days I could hear “bang,bang,bang……bang,bang,bang” and then the smoke started….

The wife told me that our neighbour was doing our house, sure enough when we got home that night there was the lucky white string tied to one of the front porch posts. 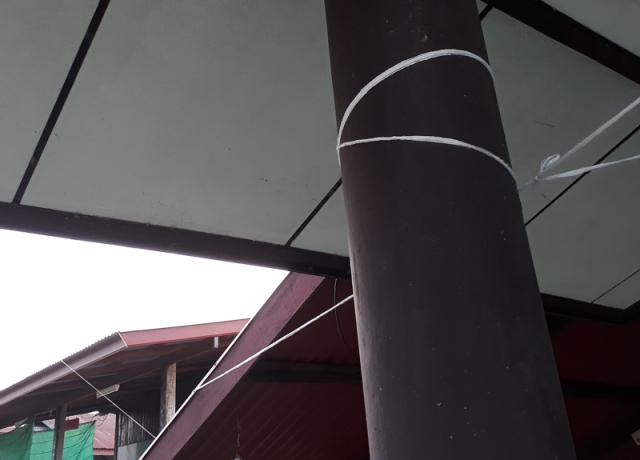 And when I went for my usual morning walk I saw that it stretched about a kilometer down the road, linking all the houses.

And then when I went into town later it was also that way too, and within a day or two the whole town is connected in a web of string leading to the wat.

Inside our house it is tied to the wife’s Buddhas :

And the scooter gets it’s good luck charm too :

And then it all leads to the town wat, where they had a prayerthon for three nights:

I must say that since the ceremony I have not heard any firecrackers from the local wat so perhaps it’s not complete mumbo-jumbo ?

Or maybe it’s just that the weather is warmer and the endless round of New Year parties and weddings has finally finished so people  are not stressing their bodies so much ?

Wishing everybody a Happy New Year for 2020, ….or for those in Thailand “Sawadee Pii Mai 2563” / สวัสดีปีใหม่.

(Thailand has it’s own B.E. or Buddhist Era calendar, several hundred years ahead of most of the world)

A short video clip from here in Isaan :

Although Thailand has it’s own traditional New Year at Songkran in April, the western holiday is also celebrated with gusto. Some of the wife’s extended family came up for the holiday, so there was much drinking, eating, and more drinking ….which is why this New Year greeting is a bit late, too many Sangsom whiskies !

One of the sisters-in-law came up from Bangkok with a small fortunes worth of good quality imported eye fillet steaks and lamb chops. Beef and lamb are not favourite types of meat in Thailand, the rest of the family ate a bit of it but not much, so really it was just for me. She did the same thing last visit and I told her not to bother because decent imported beef is very expensive here. Did she listen ? No. And then she had to cook way too much for me each time, I’m not a big eater but I always ended up with a huge steak and 2 or 3 lamb chops and a heap of “salad”.

To make up for all that sinfulness, New Year is also a time for making merit so I was dragged along to the local district office for a big ceremony and a couple of temples.

The young novices found it hard to stay awake during the sermon ! 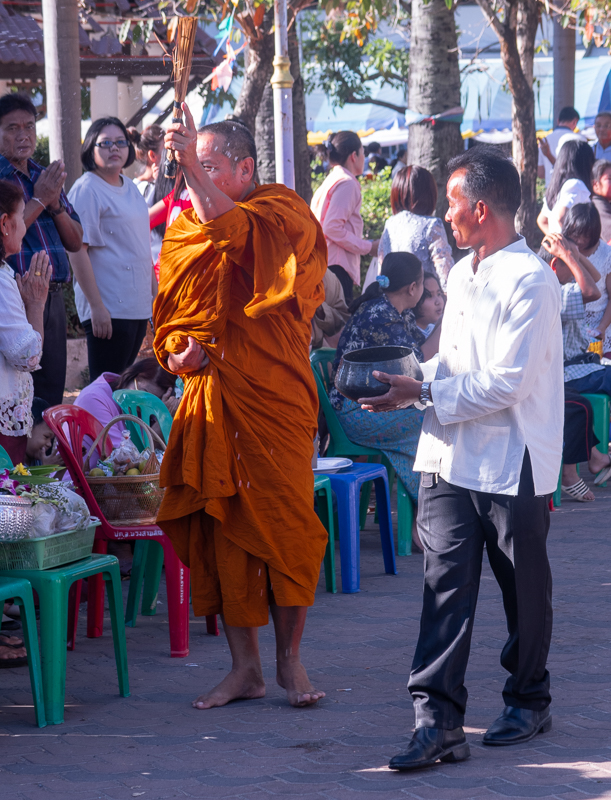 This monk saw me and seemed to think I needed extra holy water splashed over me ! 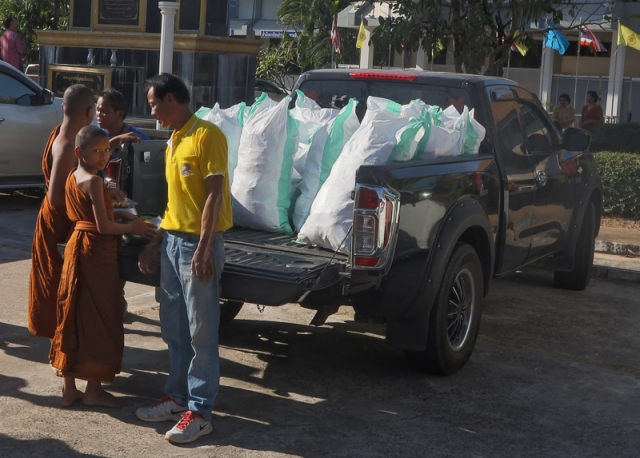 I think that’s enough for a while ?

The highlight of this temple is the embalmed body of a highly regarded monk …just the spot for a family photo ?

And now it’s only a couple of weeks to Chinese New Year which is early this year, but I doubt there will be many people up here in Ubon celebrating that.

Edit : we have just been invited to a wedding at 7a.m. tomorrow morning, which no doubt will mean more alcohol once the monks have done their thing and left. If I have understood the relationship right, the bride is the niece of the late husband of my wife’s eldest sister, in other words absolutely no relation to my wife, yet we get invited the night before ? I did have the nasty thought that he needed somebody to make up the numbers as it is tradition that instead of wedding presents  guests give money, which pays for the ceremony 🙂 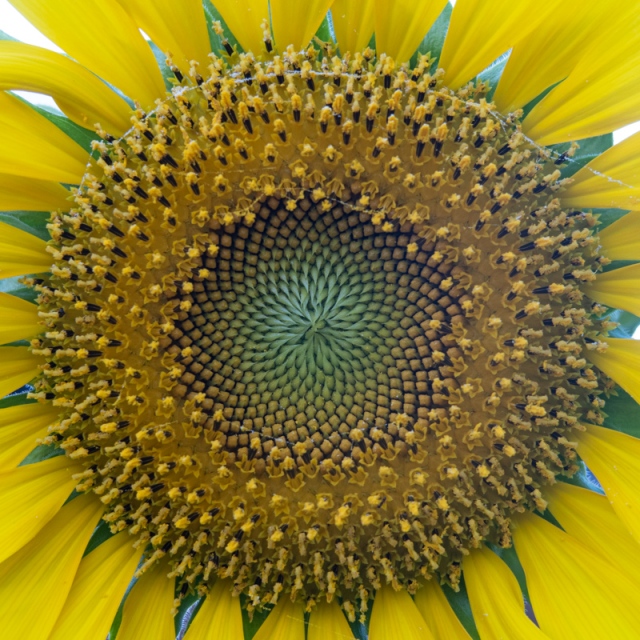 Our rental house has no garden, just a concrete slab upon which I have a few potted plants to break up the greyness. The nearest thing to a real garden is the narrow piece of dirt  between our front wall and the road ..just wide enough to plant some sunflowers to bring a bit of cheerfullness, and a few smiles to peoples’ faces.

Rather him than me …. 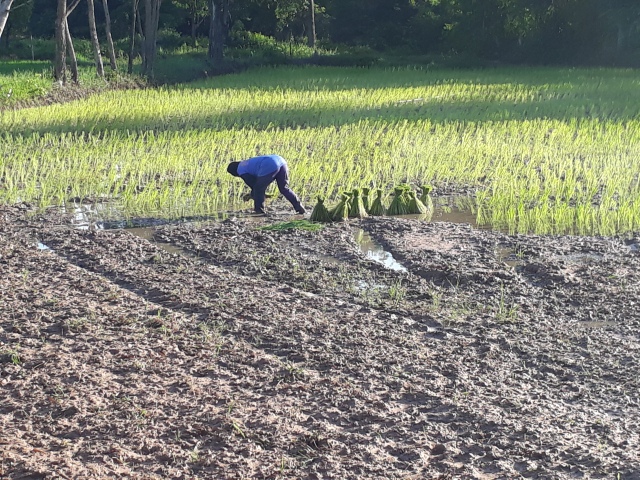 The wet season has really arrived with the recent heavy falls of rain after a bit of a false start a month or so ago. Some farmers planted out their rice crop after those early falls, only to see their crops falter without followup rain. Others, like this fellow, waited a bit longer ….now they have to hope that the rainy season is not too short for their crops to reach maturity.

This is the old, traditional method of growing the young rice densely in a nursery paddy, which can be kept well watered, then transplanting them out into the main paddies when the rains arrive. Around here most of the farmers who planted early used the more modern method of seeding and growing in the one field … more economical with the seed, also quicker and less labour intensive, but riskier with the weather as they found out this year.

How many thousands of rice stalks will this guy transplant ? rather him than me …..