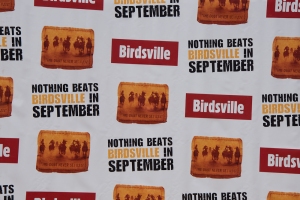 nothing beats Birdsville in September

“The Melbourne Cup of the bush”
“The race at the edge of the world”
That’s a couple of the slogans for the Birdsville races, which is just one round of the Simpson Racing Carnival. The other two are at Betoota and Bedourie but never attract the same attention as Birdsville does. You would have to be a keen race goer to stay out here in the dust for 3 weeks to watch the full carnival !
Like the rest of the area, the race track is hot and dusty. Some people opt for comfort, some dress up. I even spotted Elvis in the crowd, and Big Bird too. He would certainly have been hot !

that’s not my horse …


I’m not a race goer, and don’t usually even bet on the Melbourne Cup, but did n’t do too bad with the bookies. Must have been lucky, because I had no method to my picks ! On Friday I lost about $40, but came home $30 ahead on the Saturday. You cannot complain about that ! the only real downer was the queues for the shuttle buses back to town …some people walked the 2 or 3 kms back to the camping area and beat friends on the bus back to their camp.
Saturday night was a charity auction for the Flying Doctor, the Birdsville Clinic, and Frontier services, which raised quite a lot of money from auctioning off race week memorabilia and other stuff, such as your height in XXXX cartons ! That evening I went to watch the boxing show, even if you don’t like boxing it is worth seeing Fred Brophy get up and give his spiel before the show as he drums up customers and challengers. He is a 4th generation showman, and the last of his kind, the only touring boxing troupe still going around. Apart from the challengers for his fighters there were 2 young kids who wanted to box each other in his ring, so he put the gloves on them to start the show. After 3 very short rounds he declared it a draw, and people started throwing money in to the ring for the boys …they ended up with over $500 between them ! The challengers did not put up much of a show, they all lost to Brophy’s fighters, and so did n’t get a cent !

Sunday morning saw many people off early, I’ve stayed an extra day so that hopefully there will not be too many people driving down the Birdsville Track tomorrow, or it will be one big dust cloud all the way south !
So it is down to Maree then eastwards, but I’m not sure exactly what route to take. I want to be in Sydney by about 20th September, it’s now only 5 weeks until the big move to Thailand. I’m getting both nervous and excited about it, but I’m committed now.
I don’t know when my next post will be, I’ll catch you all later …
-25.898291 139.353581

A recently retired "Baby Boomer" , looking forward to having more time for my photography and travel.
View all posts by Mike →
This entry was posted in Australia, Travel and tagged Australia, Birdsville, boxing, fred Brophy, horse race, outback, queensland. Bookmark the permalink.

1 Response to The race weekend