You never know what you will find on the streets of Bangkok.

Or, why you should always carry a camera !

One of life’s little pleasures here in Thailand is you never know when you will stumble upon something unexpected. Yesterday I went wandering around Chinatown, camera in hand, and went out of the usual tourist part of Chinatown along Yaowarot road, into a slightly run down area. It was early evening, and I was about to turn back and find something to eat when I heard the drums and cymbals of a lion dance down a side street. 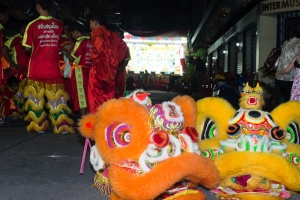 So I went in search of lions ….

…and wandered into a local community festival.

Unlike the commercialism of Chinese New Year, this was just a local party but I was greeted with smiles and wais. One of the organisers came up and welcomed me, and explained it was an annual combination end of year/honour their ancestors/gods/His Majesty event, but I later found out it was a bit more than that. I saw a couple of film crews interviewing some of the residents, including one old lady who was sobbing her eyes out. She kept switching between Thai and Chinese (I presume), but from her Thai I gathered she had to go somewhere. When one of the cameraman said hello to me in English I asked him about it, he told me that everybody is being evicted and that the area will be redeveloped, so this would be the last time that this community celebrates together.

No doubt the developer will erect something that Bangkok really does not need, like yet another mall

The quaint narrow streets were lit with Chinese lanterns hanging from every building, in any other country this area would have been gentrified and turned into a restaurant/bar strip. One day Bangkok is going to realise what it has lost, but for now conservationists are fighting a losing battle.

On one street an outdoor cinema had been set up, with a screen hung across the road and an old fashioned reel to reel projector, showing an old Chinese movie with thai and english subtitles, and a LOT of scratches on the movie ..it must have been really old. 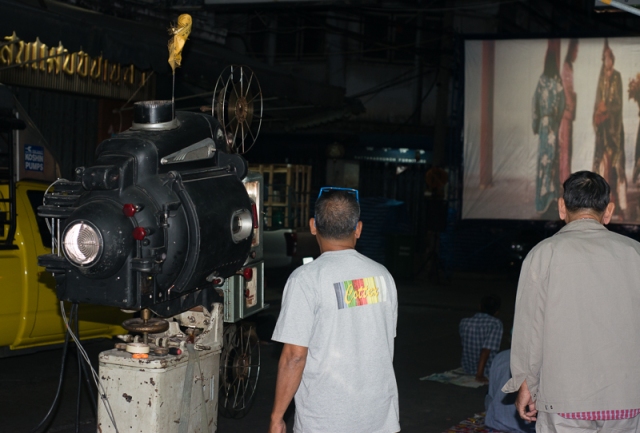 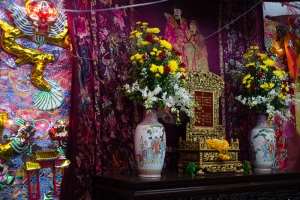 On the adjacent street there was a stage at one end, and a tent with a series of shrines/altars and tables full of offerings (for their forefathers and gods perhaps) and more tables outside, one with pictures of Chinese gods I think, one with a Buddha and candles, and one laden with food next to a large horse statue, this being the Year of the Horse.

And then 5 monks turned up, and I got seriously confused when they ignored the Buddha, knelt in front of the Chinese gods and started chanting. I could see that the texts were in Chinese. It was rather mystical and enchanting, despite the cameras and videos being almost shoved in the monks’ faces by film crews and the locals. I stood back and tried to be a bit discrete while I took some photos. 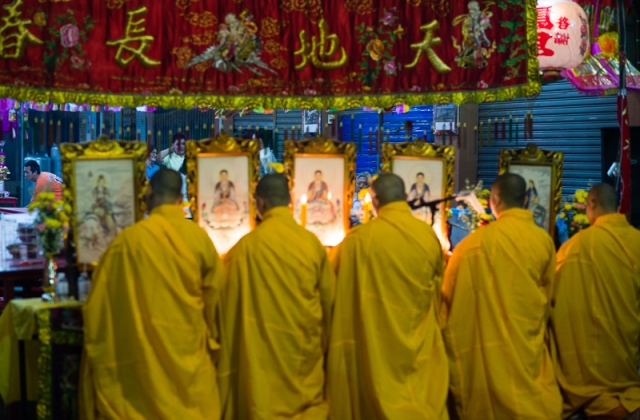 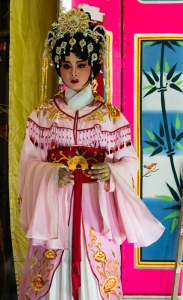 After a while I moved down to the stage where they had just started a Chinese play or opera, I have absolutely no idea what it was about but the costumes were fantastic. When I went back to the cinema I saw that they were now showing a Thai movie with Chinese subtitles. It was n’t quite as old as the previous movie, but it was from a forgotten Thailand with almost as many rickshaws as cars on the town streets, and ox-carts instead of pickups in the rural scenes.

The monks were still chanting away around an hour after starting, the film crews had moved on by now so I managed to get some clear photos this time. And then they changed shift, this time the new monks sat at the table with the Buddha and started chanting again. After a while they moved to the table next to the horse, the head monk started sprinkling holy water or something over the offerings of food for the horse before going into the tent and doing the same routine inside. Back to the Buddha table and more chanting ….. 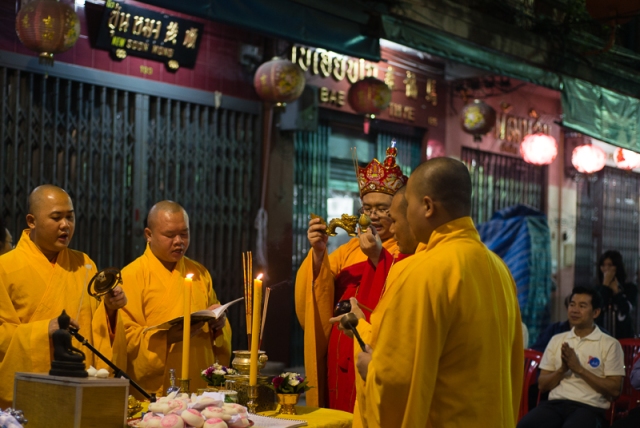 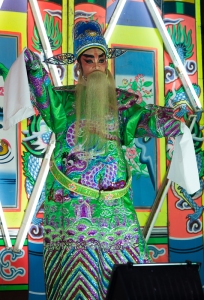 I watched a bit more of the play/opera/whatever and then went home, happy with what I had found that day. Many people say that Thailand has lost it’s soul, that the Land of Smiles has become the land of scams, but in the Wat Tuk community old Thailand lives on.

“thank you, ขอบคุณ “ for your hospitality. 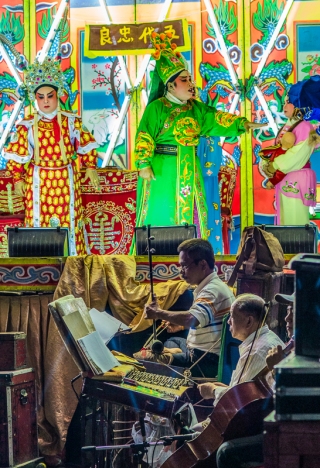 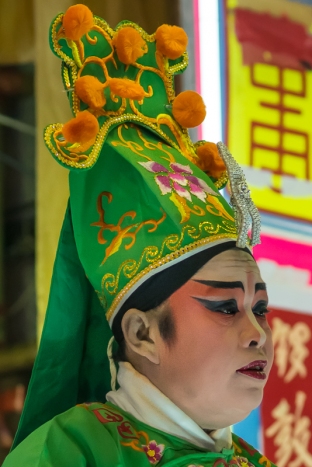 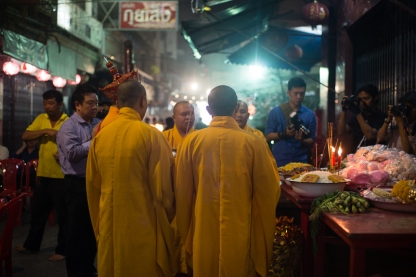 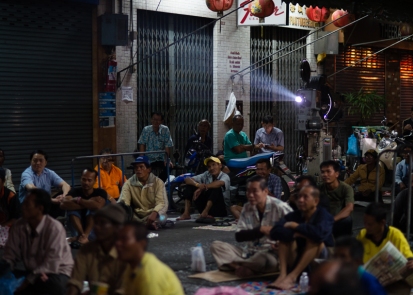 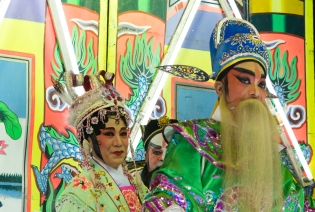 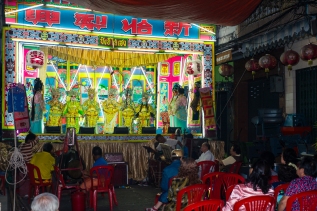 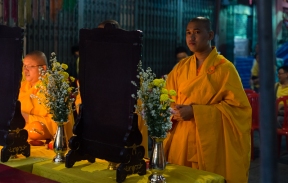 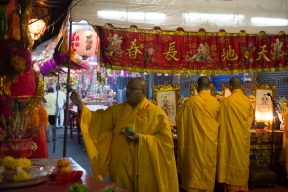 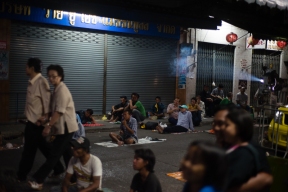 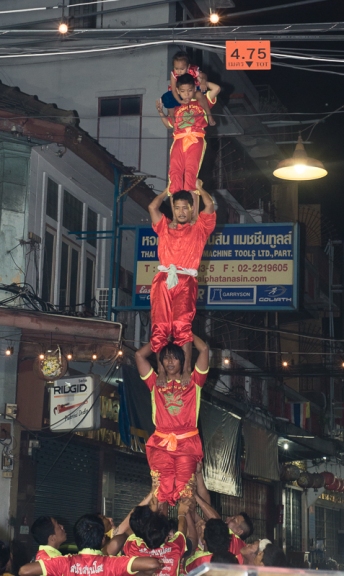 Oops …luckily there was plenty of people to catch them 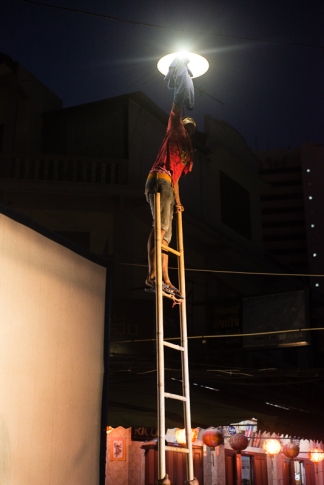 How many people to remove a light bulb ? 4 to hold the ladder, one to climb it and take out the street light spoiling the movie 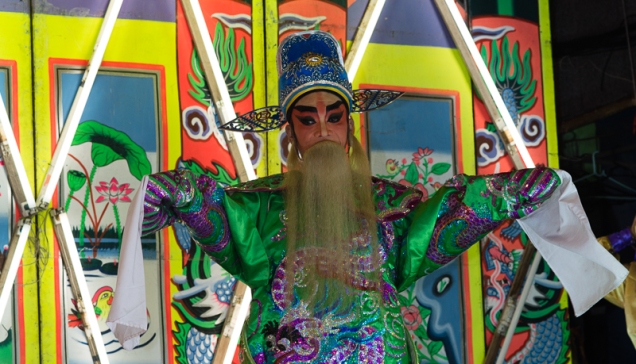 A recently retired "Baby Boomer" , looking forward to having more time for my photography and travel.
View all posts by Mike →
This entry was posted in Explorations, Photography, Thailand, Travel and tagged bangkok, Chinatown, Chinese opera, Thailand, theatre. Bookmark the permalink.