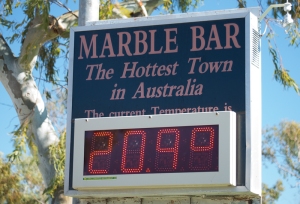 A chilly day in Australia’s hottest town. In summer it is often over 40 for days in a row

On the way to Broome I made a slight detour into Marble Bar, known as the hottest town in the country because it is often over 40C in summer, but a rather chilly (to the locals) 20 degrees that day. I had a beer in the famous pub, all the locals were rugged up in jackets and long trousers, I wore shorts and t-shirt ..a case of latitudes and attitudes!
Just outside town are a couple of permanent waterholes that were rather nice, and rather noisy with all the cockatoos ! There were literally hundreds of the birds perched in the gum trees, and which took flight with an enormous screeching when I got too close. 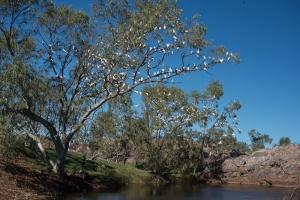 On the way towards Marble Bar I had noticed a sign pointing to “Doolena Gorge” and decided to check it out on the way back. I’m glad I did, as it turned out to be one of the most beautiful bush camps I’ve found. The signpost pointed down a track that led to a clearing next to a large waterhole, about 2kms long and 200m wide, with red cliffs coming right down to the water’s edge. At sunset the rocks turned a golden glowing amber colour, truly magical, and not in any of the tourist brochures.
The next morning it was back on the highway and heading towards Broome, still an awful long way to go, too far for one day, as it is around 600 kms between Pt Hedland and Broome, with only Sandfire Flats roadhouse in between.
When I did get to Broome it was down to Cable Beach almost right away for a swim !
The frangipani and palm trees certainly make a change from spinifex and scrub, you soon slip into “Broome time’ quickly.

A number of places along the north west coast have a natural phenonoma called “Staircase to the Moon” when a rising full moon coincides with a low tide, and the moonlight on the wet mudflats looks like a staircase leading to the moon. Broome is the most well known place for it, and I happened to get there on the right day : 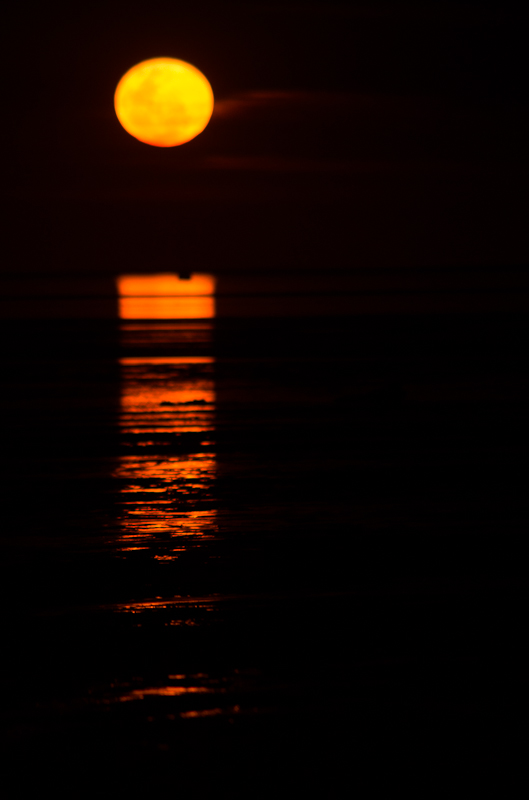 Staircase to the moon

Not as good as the postcard pictures, but I suspect they did a bit of photoshopping ?
Broome is an old pearling town, and is quite cosmopolitan due to all the nationalities that used to work on the pearling fleet. The divers were nearly all Japanese, the crews were Islanders, and the skippers Caucasian. And then there were the Chinese storekeepers, Aboriginal workers, and other nationalities that drifted into town.

Many of the Japanese divers died looking for pearls, and they have their own cemetery here, as do the Chinese. In those days whites and “coloureds” did not even mix after death….
In the early 20th century many novels were based in Broome, usually trashy stories of brave Caucasians rescuing damsels in distress from the clutches of the evil Asiatics, or the black sheep of a family coming to Broome and making a fortune.
Time and cyclones have destroyed most of old Broome, the old Courthouse and Sun movie house being about the only buildings still standing. And the Roebuck hotel, of course, notorious for it’s weekly wet t-shirt competitions featuring a never ending supply of nubile backpackers. Chinatown has been resurrected into a tourist shopping mecca, but somehow the place still has a bit of aura about it.
More photos to come in the next post ….this one is long enough for now.

A recently retired "Baby Boomer" , looking forward to having more time for my photography and travel.
View all posts by Mike →
This entry was posted in Australia, Landscape, Photography, Travel, Uncategorized and tagged Australia, Broome, Marble Bar, western australia. Bookmark the permalink.