I’ve posted a couple of photos from my trip to Ayuthaya the other week, I’ve finally edited the rest

I was hoping to get some dramatic wet season skies, so I took along my Big Stopper filter and tripod to get some long exposures, but all to no avail as the weather was sunny and hot …. all I got was sunburn. Ok, not quite all, as I did get some photos just not the sort originally envisaged.

Ayuthaya used to be the capital of ancient Siam, from 1350 to 1767 according to the guidebook, a time when the kings of Siam ruled over an area bigger than France and England combined and the city was full of glittering temples, golden Buddhas and palaces full of treasure, international traders were duly impressed with what they saw. But they were a rather warlike mob back then, and in 1767 they picked one fight too many with the Burmese who were victorious and proceeded to loot the city, destroying most of the temples and Buddha figures even though they too were Buddhist. 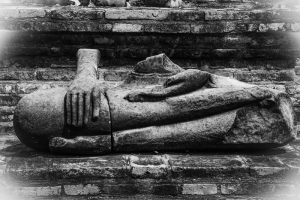 (The Thais used to do the same thing though, as can be seen in Vientianne Laos. Although my ex-GF did n’t believe me or the guidebook when we went to Wat Si Saket there ..“Thai people not do that” …yeah, right.) 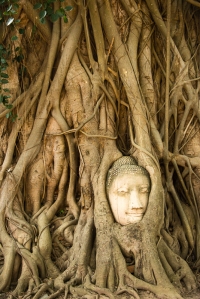 The famous ‘Buddha head in a tree”

Most of the ruins are fairly close together, on a large island on a river bend, others are close by in the surrounding area. You can walk to the central sites, and hire a bicycle to reach the outer places.

As Ayuthaya is fairly close to Bangkok a lot of tourists just come up for the day, so it’s best to get an early start to beat the crowds especially at the most popular sites. This would have to be one of the most photographed objects in Thailand, a Buddha head at Wat Mahathat that has been overgrown by the roots of a tree and lifted off the ground.

Come here during the tourist bus rush hour and you have to queue up to get a shot of it !

Although there are signs everywhere telling you not to climb over the statues, and the guidebooks tell visitors to treat them with respect, there is always somebody who wants to take a selfie standing over a Buddha image …..people, they might be old and broken but they are still sacred objects as I explained to one European girl. It’s no wonder some Thais think we are ignorant savages ! 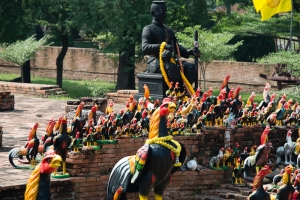 One of the greatest of the Siamese kings was King Narasuen, who was famous for his skill at training fighting cockerels.

If you see a statue surrounded by dozens of roosters you can be sure it is King Narasuen !

Some more photos for now, and then some practical stuff about Ayuthaya below. 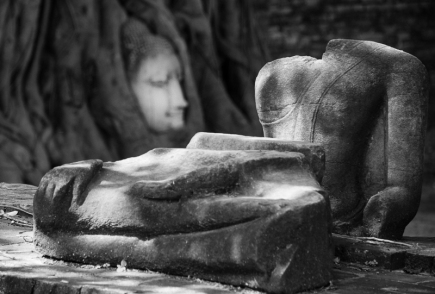 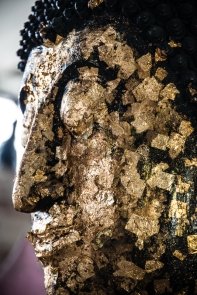 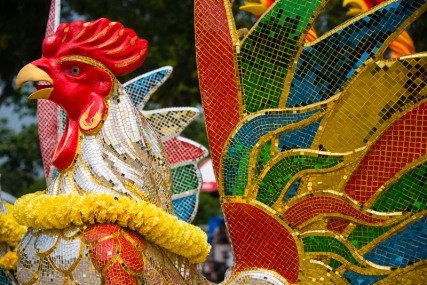 Another of king Narasuens roosters

This temple has been built over the ruins of an ancient one.

Ayuthaya is about 100kms north of Bangkok, easily reached by train, bus or minivan. I got the train up from Hualamphong station, the ‘special express” with air-con, reclining seats and meal service cost 315฿, the ordinary 3rd class would cost a mere 20 baht or so. Returning I took a minibus to Victory Monument in central Bangkok for 60 baht. If you only want to do a day trip it’s easily done, but I stayed in town for a couple of days at “Tony’s Place’ on the guesthouse strip off Thanon Narasuen, in the middle of town. 300 baht for fan room, with basic but clean bathroom. They also had rooms for 250 baht with shared bathroom, or air-con rooms for 500 baht up. Prices would probably go up during the peak tourist season. 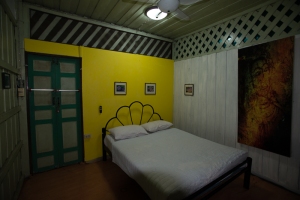 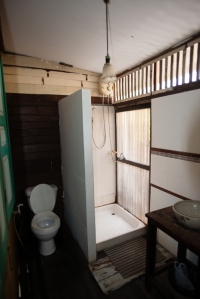 They also have a reasonable restaurant and bar, with piano music a couple of nights a week. (on that subject, there was a bar just down the road with rather loud music, but bars in old Ayuthaya have to close by 11pm so that was not too much of a nuisance)