To repeat a Kipling quote from my last post, This is Burma, and it is quite unlike any place you know about

I am in Yangon now, where the Internet is slightly above snail pace, so time for an update and a few iPad photos. My “real” photos will have to wait until I get home and onto my laptop, so that I can download over 40 GB of photos and videos! I brought 2 16 GB cards with me, had to buy another 8 GB card in Bagan which I soon filled up, so first task when I got here to Yangon was to find a camera shop that sold class 10 SD cards of a decent size. Plenty of 4GB class 4 micro SD cards for phones, but nobody stocked faster or larger SD cards….so if anybody is coming to Myanmar bring plenty of memory cards if you shoot RAW files ! 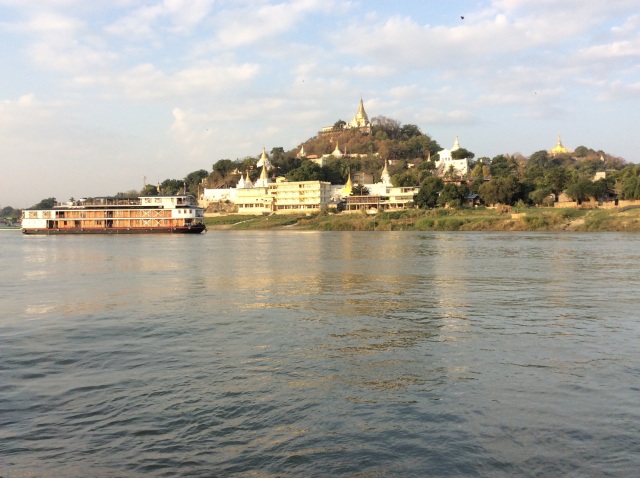 Some of the temples of Sagaing

From Mandalay I took a ferry downriver to Bagan, along the Ayeyarwady (Irrawaddy) river. The first hour or so was interesting, cruising past the old city of Sagaing with it’s multitude of temples but then the scenery became monotonous. Because of the sandbars and low water levels at this time of the year the ferry zigzags from one side of the river to the other, and as Murphy’s law would have it, we were always on the wrong side when something interesting came into view! We left Mandalay at 7am, before sunrise, and reached Bagan around 6pm just after sunset. Apparently the upstream trip takes about three hours longer, so it is certainly best to come downstream.

Panorama of just some of the temples of Bagan.

For anybody who has never heard of Bagan, it is yet another ancient capital of Myanmar, from around the 11th to 13th century AD. During this period the people converted from Hinduism to Buddhism, and built temple after temple, thousands in all. There are some 3000 monuments still standing, so places like Ayyuttaya and Sukhothai in Thailand pale in comparison. The temples here might be slightly smaller than Angkor Wat in Cambodia but not the other temples of the Angkor area, and for sheer numbers Bagan wins easily. Apparently at the peak of the temple building boom they were starting a new monument of some kind every two weeks !
One of the best ways to comprehend the size of Bagan is to take a balloon ride over it, something which has been on my bucket list since I first saw it on television.
Another tick on my bucket list! 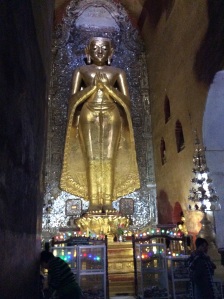 I spent a few days there getting around by bicycle and e-bike, it was good to see how environmentally conscious they were trying to be for a third world country. Many of the best temples are close enough to cycle around, but an electric bike is needed to explore some of the less visited places where you would often be the only person there.
From Bagan I flew here to Yangon, which used to be the capital until the junta built a new city and moved all the government there. Apparently Yangon went backwards drastically when that happened, especially as the country was under sanctions at the time. The sanctions have been at least partly lifted, and with an increase in business and tourism to the country Yangon is booming. I saw lots of new buildings going up on my trip in from the airport, but unfortunately nobody seems interested in saving some of the old colonial buildings from the days of British Burma, I’ve seen quite a few decaying old buildings around town already.
My hotel is downtown, close to the river, close enough to hear the hooters on the ferries and cargo ships. I have to lean out of my window to see the river, but there is a good view from the top floor restaurant.
The highlight of Yangon, or even Myanmar, has to be Shwedagon Pagoda. I’ve seen my share of amazing temples in the 20 or so years that I have been visiting SEA and now living in Bangkok, but Shwedagon out-glitters tham all. The main Chedi is covered with bamboo scaffolding at the moment for cleaning or maintenance, which kind of spoilt the photos, but under the scaffolding is 27,000kgs of gold, layer after layer after layer of gold leaf. Plus thousands of diamonds, rubies and other precious stones decorating the top part. To say nothing of a couple of solid gold Buddhas and several antique bronze ones which are literally priceless around the rest of the complex.
Another Kipling quote: “A beautiful winking wonder that blazed in the sun”
Sorry Thailand, but Wat Pho, the Emerald Buddha, etc do not come close to the treasures of Shwedagon.
That’s all for now, expect lots of “real” photos after I get back to Bangkok in a few days…you have been warned !

A recently retired "Baby Boomer" , looking forward to having more time for my photography and travel.
View all posts by Mike →
This entry was posted in Myanmar (Burma), Travel and tagged Bagan, Buddhism, Burma, Myanmar, temples, Yangon. Bookmark the permalink.