As I mentioned some weeks ago I was headed to Ko Phi Phi (pronounced as kaw pee pee)for a week on the beach, I’ve finally got around to writing a blog about it. I first went there around 20 years ago in the early 1990’s when it was truly a tropical paradise where you could stay in a bamboo hut on the beach for 50 baht (less than $2) if my memory serves me well. That was long before it was discovered by Hollywood and Leonardo di Caprio and made famous as The Beach.

It is east of Phuket, between Phuket and Krabi, just over an hour ferry ride from either. In my younger days I took an overnight bus from Bangkok  but nowadays I prefer a bit more comfort, and why not when you can get a cheap combined flight/airport to pier transfer/ferry ticket through Nok Air for about 2400 baht each way. Praise be to “Low Cost Carriers’ like Nok Air and Air Asia. Not like the so-called budget airlines back home ! Another plus for living in Thailand

I had not been back for some time, since before the Boxing Day tsunami which devastated the island (and many other places). I had heard many horror stories about the island since it became famous, about how it was so crowded, so over developed, so expensive, so I did have mixed feelings about going back. Sometimes it is best to let those perfect memories stay as memories and not be spoilt by today’s realities.

Phi Phi panorama from the viewpoint

Ok, so those 50 baht huts had been replaced by 5000 baht/night villas but there were still plenty of cheap places to stay off the beach. I easily found a 600 baht room, with free Wifi, cold showers and a comfortable bed in town. While it seemed a long way from the beach at first, it was only because the lanes through town zigzag everywhere and once I found the shortest route it only took a few minutes to walk to the beach. Mind you, then it was a bit of a hike along the coast to the best snorkelling spot at Shark Point, Long Beach.

Absolutely everything has to be shipped over from the mainland so it is not surprising that prices for meals and drinks are a bit expensive (by Thai standards). A 20baht can of drink in Bangkok cost 40 baht in town, 50 baht at a Long Beach resort, which I think is reasonable….although the small bar halfway between town and Long Beach which wanted 75 baht for the same can of Coke did not get my business !

It was only the start of the high season, but it certainly did not feel overcrowded at that time. Perhaps a couple of weeks later things would be different ? Or perhaps it was that all the young backpackers partied all night and did not surface until afternoon ? Come evening and they would be staggering around town again, clutching bottles of Chang or buckets of cocktails and spirits….the ugly side of tourism. 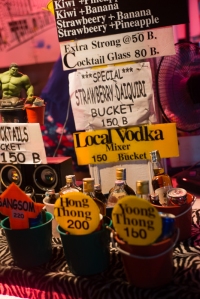 Ko Phi Phi is a Muslim island, many restaurants don’t serve alcohol, some guesthouses do not allow alcohol on the premises, it has a mosque but no Buddhist wat, and in my visits all those years ago people tried to be conscious of the locals feelings but not nowadays. It might be a holiday resort, but girls, would it hurt to put a sarong and t-shirt on instead of traipsing through town in a teeny weeny bikini even at night ? And guys, cover up that beer belly please ? (OK, rant over)

Apart from my normal camera I had a loan of an underwater Nikon AW1 and  GoPro cameras ( more about them in this post ) so I had some fun with them in the water. I took quite a few videos with them that I am trying to edit into something watchable, but for now here are some photos:

Every day is a friday ..

I might go back again next year, around March after high season has finished. You can island-hop by ferry all the way from Phuket to Langkawi via many islands, coming back to the mainland at Georgetown, Penang in Malaysia. That would certainly beat taking the bus !

A recently retired "Baby Boomer" , looking forward to having more time for my photography and travel.
View all posts by Mike →
This entry was posted in Explorations, Photography, Thailand, Travel and tagged ko phi phi, phi phi island, Thailand. Bookmark the permalink.