As I mentioned last week, I spent some time down in Phang-nga province and went out on a live-aboard snorkelling trip out to the Similan Islands National Park. A wonderful time was had, and I came back with hundreds of photos and video clips. I borrowed a GoPro and a Nikon 1 AW1 underwater camera again, as I did when I went down to Ko Phi Phi. As it turns out I took far more short video clips than photos and I have been trying to edit them into something worth watching for the last few days. Unfortunately there seems to be a problem with one of the GoPro memory cards, and neither Lightroom nor GoPro’s software can down load some of the clips off that memory card although I can play them back on the camera’s LCD screen. One of the clips has some good footage of a shark, a White-tipped Reef Shark I think it is …harmless unless you are a small fish. Anyhow, I’ve put the video project aside for a while to concentrate on some photos, much less of a headache.

Before and after the boat trip I stayed at Poseidon Bungalows in Khao Lak which is part of the same operation as the snorkel tour. They have a variety of bungalows, but I went for one of the basic “Cheap Charlie” fan-cooled wooden huts with no frills but perched on a small hillside almost over the beach and with a great view. The bigger, more expensive bungalows are further back amongst the trees without the view. There is a small private beach just below the huts, or just a short walk down to the main beach.

The view from my bungalow …950 baht/night

If you need noisy jet skis and pestering vendors during the day, and raging nightlife after dark, then Khao Lak is not for you. But if you like empty beaches to stroll along, where the only deck chairs are at the few very laidback beach bars where you can watch the sun set, then it might be your choice. It’s very different to Phuket just down the coast ! 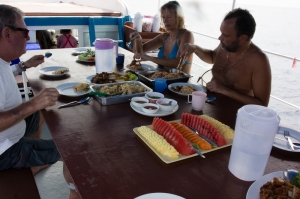 Day 1 of the snorkel trip saw us leaving at 7am for a short ride to the pier in town, on to the boat and out to sea, with breakfast soon to follow. Although the boat can carry about 18 passengers there were only 10 on this trip, plus the guide, boat captain and his wife/cook, boat-boy and cook’s helper. One thing is for certain, despite all the exercise while snorkelling you will not lose any weight with all the excellent food they fed us ! 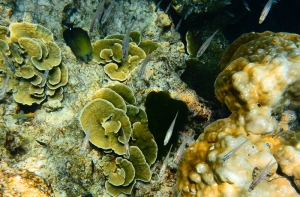 The islands are about 60km offshore, it took about 4 hours to reach our first destination, and we were soon in the water for the first of many snorkelling stops. While there is some dead coral laying around most of it seems in good condition, and being a Marine sanctuary there are lots of multicoloured fishes around you as soon as you get in the water. I saw a Moray Eel within minutes of getting wet.

We made a few more stops that day before anchoring in “Donald Duck Bay” at Island #8 for the night. If you have a good imagination one of the rocks on the headland looks a bit like Donald Duck’s head. There is a camping area on this island, and at sunset I think everybody climbed up to the Sail Rock lookout for the view.

The next morning we were off to new spots including one, “Elephant rock”, that our guide had never snorkelled before because usually the current is too strong. Even this time we had to get towed by the dinghy before drifting back to the boat over some very deep water. This is supposed to be a good dive spot, but it was n’t the best for snorkelling. I lost track of how many times we went into the water during the day, but I was certainly tired by the afternoon. In late afternoon we went ashore at the only other island with accommodation (Ko Miang) and did the short walk across from Princess Beach to Honeymoon beach. Apparently one of the princesses has a bungalow here, on the rare occasions that she stays there she gets the island to herself …one of the perks of being Thai royalty !

The next morning it was more of the same …eat, snorkel, move, snorkel, eat, move, snorkel, move, snorkel to finish at Hideaway bay. This is one of the best spots, spoilt only by day-tripping tourists who come over by speedboat to splash around fully clothed and wearing lifejackets while scaring away the fish. We had managed to avoid them for most of the trip by going to the most popular spots early, before they arrived from the mainland en-masse. And then after a thoroughly enjoyable 3 days it was back to the mainland for a couple of days at Poseidon again and then flying back to the Big Mango.

If anybody is looking for a live-aboard snorkelling trip I can definitely recommend Poseidon Bungalows and Similan Tour, this is the second time I’ve been out with them and I’m already thinking about next year again perhaps …..

Anyway, here are some more photos I took or you might want to check out some of the photos taken by the guides on their Facebook page …much better than mine but I guess practice makes perfect, perhaps I should go back down to Phi Phi and get some more practice

Taking decent photos while snorkelling is harder than while diving, you don’t have weights and a BCD to hold yourself steady underwater like a diver has so kudos to the guides for their photos. 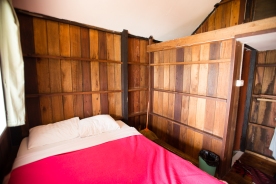 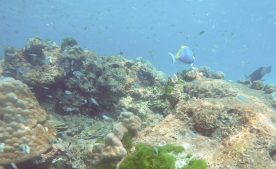 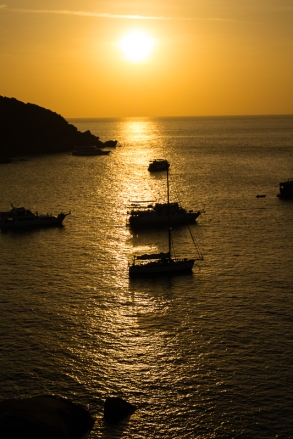