The last stop on the trip was Yangon, which as I mentioned in an earlier post used to be the capital of Myanmar until the junta built a brand new city for their military government and moved all the government departments there. Combined with the economic sanctions in force at the time this caused Yangon to decline, with a lot of the beautiful old colonial buildings previously used by officialdom being left to decay.

But with the sanctions mostly lifted and tourism booming, Yangon is coming back to life. There are new buildings going up and lots of new cars on the road, but at least the drivers there only use their horns when actually needed, unlike Mandalay or even Bagan …it’s a lot quieter on the streets of Yangon. (for those familiar with SEA have a look at the street scenes of Yangon and spot what is missing from them) 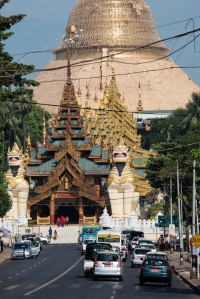 The crowning jewel of Yangon and Myanmar is the Shwedagon temple, one of the most sacred of all Buddhist temples, and probably it’s most dazzling …or it would have been if the main chedi and it’s 27,000 kgs of gold was not covered up by scaffolding and bamboo matting

But there was still plenty else to see anyway. 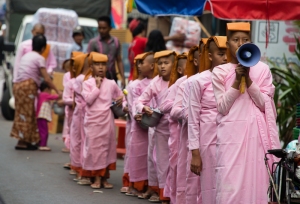 One thing that I noticed is that there are a lot of nuns compared to Thailand, and that they collect alms on the street as the monks do, something that does not happen in Thailand.

While walking around town I happened upon this young lad waiting for some sort of ceremony to start. Exactly what sort of ceremony I don’t know, but with a band playing and food being cooked the guests were enjoying themselves more than this fellow seemed to be !

And neither do I have any idea what this decorated pickup truck is all about either. I was trying to get a shot of the chedi floodlit at night when he just stopped in front of me. 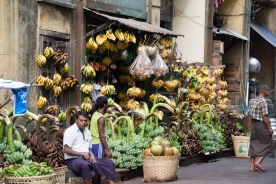 Yes, we have bananas 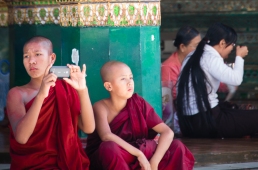 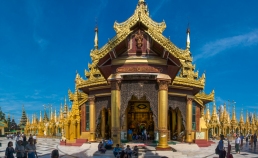 So what is missing from the streets of Yangon that is ubiquitous elsewhere in south east Asia ? Motorcycles, and anything resembling or that once was a motorcycle, are banned from the roads of Yangon. No tuktuks, no motorcycle delivery carts. Apparently one of the senior generals had his car sideswiped by a motorcycle in Yangon, so they just banned all motorcycles and their derivatives ! I guess you can do that when you are running a military dictatorship.

A recently retired "Baby Boomer" , looking forward to having more time for my photography and travel.
View all posts by Mike →
This entry was posted in Myanmar (Burma), Photography, Travel and tagged Burma, Myanmar, Yangon. Bookmark the permalink.