A few years ago I saw a segment on an Australian TV travel show featuring a balloon flight over the temples of Bagan, and knew that I had to add this to my bucket list. Well, it’s ticked off now !

When I started planning this trip to Myanmar the first thing that I did was book with Balloons over Bagan and then plan the rest of the trip around this flight.

The day started with an early pickup in one of the companies vintage buses, although once it became light enough to see I realised that the launching spot was only 100 metres from my hotel. There were in fact 2 companies launching from the same site, so there were about 12 balloons flying from here. There were 16 passengers in our balloon, so it’s quite a big business, with lots of ground grew running around. While the ground crew and pilots prepared the balloons we tucked into the tea, coffee and snacks, waiting for the burners to fire up and inflate the balloons.

After a safety briefing ( Don’t touch any of the lines or ropes) and being allocated our positions in the basket we climbed aboard, some more elegantly than others, another burst of the burners, let go of the anchor rope holding us to the bus, and we were off.

Although it had seemed dead calm on the ground, once we were above tree top level we began to move quite quickly. The breeze was heading in the right direction to take us over most of the main temples so the cameras were clicking away merrily.

Being just after dawn, with quite a bit of haze around, the light was rather flat so I had to do a bit of work in Lightroom to get some contrast into the earliest photos, in some of them the histogram was just in the centre third of the graph (for non-photographers, that’s just a technical way of saying dull, boring, flat photos with no contrast). 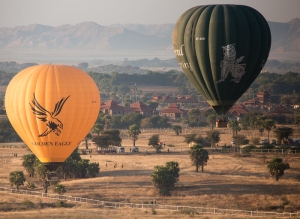 After passing over the temple area we flew over a rural area, low enough to scare the cattle sometimes when our pilot fired up the burners. After about 40 minutes our pilot pointed out our landing zone, then told us to take our last photos and videos and to put our cameras on the floor of the basket, and then take our landing positions. The landing was quite gentle, helped no doubt by all the ground crew hanging on to the “brake rope” and then grabbing the basket to bring us to a stop.

By that time the local vendors had arrived at the landing zone, and each balloon had it’s share of people selling postcards, paintings, lacquerware, etc. I weakened and bought a set of watercolour paintings of the balloons from this young lad, well they were only two dollars. The other vendors must have thought I was an easy mark and closed in on me, but no, I don’t want any lacquerware, or marionettes, or t-shirts, or postcards ……

After finishing off the champagne and croissants we climbed onto the bus for the return trip, which took as long as the flight thanks to getting stuck behind a wedding procession for about 15 minutes, the bus being too big to turn around on the narrow village street and take a different route.

UPDATE: I now have a video of the flight on YouTube.

Letting the hot air out for deflation

Coming in to land 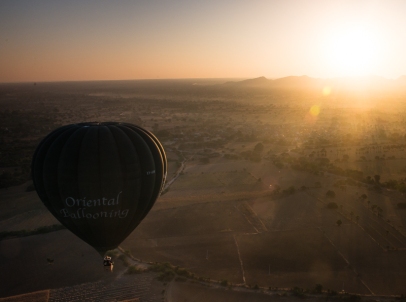 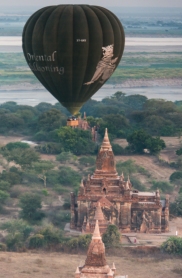 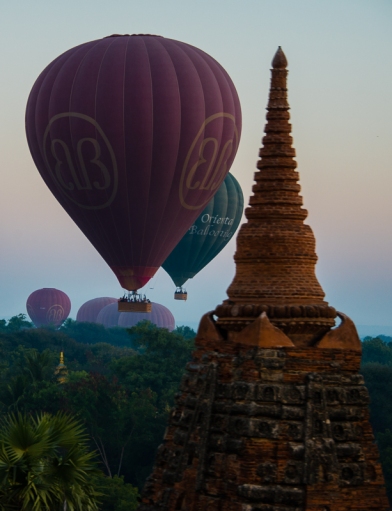 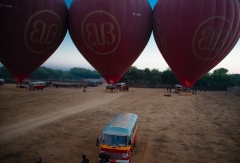 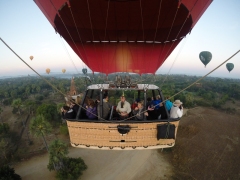