As I mentioned a few days ago, I have been on holiday down at Ko Lipe, way, way down south, in fact it is the southern most island in Thailand and about 30 kms away from Langkawi in Malaysia. Getting there is quite a journey, starting with a Nok Air flight from Bangkok to Trang, a minibus to the ferry port of HatYao, and then a 3 hour ferry trip out to the island.

The flight and minibus went smoothly, but then there was a wait for the ferry to arrive. Tigerline’s schedule is only a very rough guide ! The boat runs all the way from Phuket via Ko Phi Phi and Ao Lanta down to Lipe, so it’s quite a long route. The ferry out to the island was one of their old boats, rather tatty inside. I’m sure (?) they had lifejackets somewhere but there were none visible in the cabin ! I also noticed that the handles on the emergency exit windows were broken, so you could not have opened them. Perhaps not for paranoid travellers ? Anyway, we got there safe but late, at around 4pm …a couple of days they did not arrive until 6.30, and one day the boat did not arrive at all !

The island is quite small, and you can walk across it in about 15 minutes or less, or take one of the local “taxis” ….a motorcycle with sidecar. There are only a few vehicles on the island belonging to resorts, and one beaten up old rubbish truck.

There are 3 main beaches on the island, Pattaya Beach and the not very originally named Sunrise and Sunset beaches. Most of the resorts are on, or just off, Pattaya Beach yet it was never crowded although it might be different at peak season of course. Sunrise beach has most of the more expensive resorts yet it is probably the worst beach. Much of it was covered in rubbish, sad to say a lot of it came from the locals’ village in the middle of the beach. I saw some of the boatbuilders casually throw empty spray paint cans into the ocean.

Sunset Beach tries hard to be the hippy backpacker sort of place, but does not really succeed. Ko Lipe does n’t seem to get the hippy beach dropout crowd, nor the Red Bull and vodka bucket toting gap year mob that tick off Ko Phi Phi as part of their asian travels, nor are there any full moon/new moon/any moon parties like on Phi Phi or Pha-ngan.

What Ko Lipe does have is some of the best diving and off-the-beach snorkelling in Thailand, which is good because there is not much else to do ! And if you take a longtail boat tour around some of the nearby islands the snorkelling gets even better. All the boats run on one of 3 set routes, and all 3 stop at Jabang where a rock rises about 15m from the seabed to a few metres deep, attracting lots of fish and with lots of soft coral. 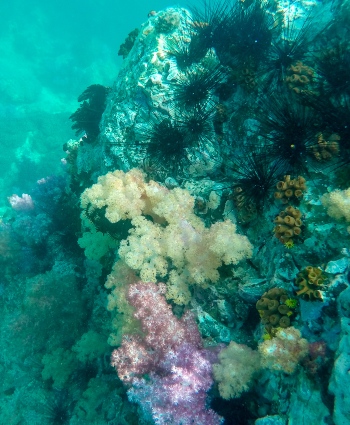 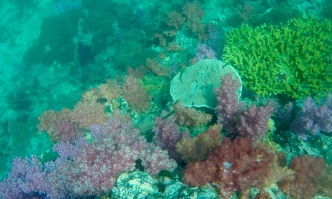 It can get a bit crowded here, but then the boat routes spread out and it’s not too bad. Most of the other snorkelling spots are quite big and you can get away from the crowds if you want. Many of the people on the days that I went were from Malaysia, and seemingly could n’t swim so just splashed around near the boats wearing lifejackets. One of the boat’s stops is at Ko Hin Ngam, which is covered in black rocks which many of the asian tourists like to build into towers. It must be a cultural thing, our boatload of farangs just said “ok, seen it, let’s go” and got to the next snorkelling spot ahead of the crowds.

I could easily have spent more time on the island just lazing around, snorkelling every day and watching the sunsets (which were often pretty spectacular) but I had prebooked my return flight so thought I had better come back and see my ladyfriend on schedule.

My ticket told me to check in for the return ferry 30 minutes before departure, but where ? Tigerline’s website said their office was on Sunrise beach but was nowhere to be found. Asking at the travel agents around town got me several different answers, but it turned out that you just got a longtail out to the ferry, and they came around checking after the boat had sailed. The return trip was on their new boat, with comfortable seats, aircon that worked, and lifejackets above your seat ! It still took nearly 3 hours to get back to the mainland though, and would have been another 3 or 4 hours for those people heading to Ko Phi Phi …. I hope they had a good book. I’m glad that I had my Kindle for the 3 hour wait at Trang airport

(PS more and bigger photos at my pbase gallery here, and for more info on snorkelling at Ko Lipe or elsewhere in Thailand and South East Asia have a look at this blog : WhatsTheSnorkellingLike ) 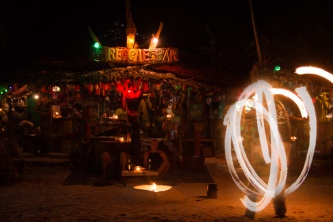 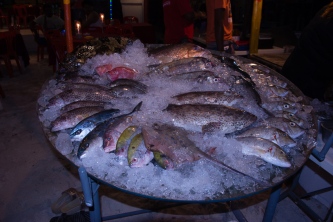 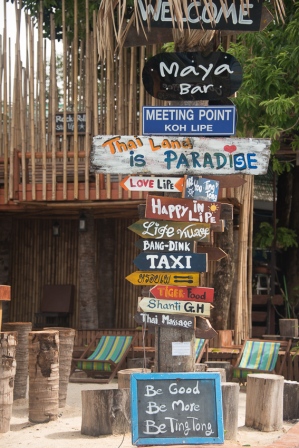 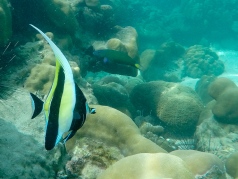 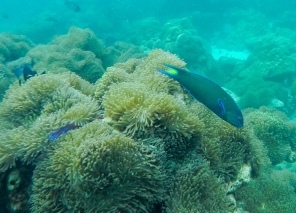 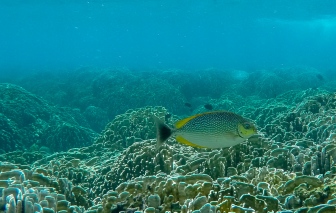 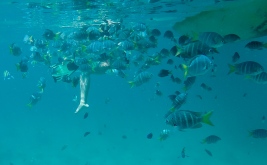 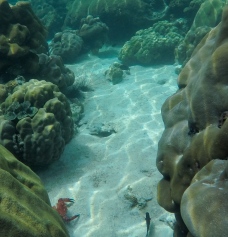 I did n’t see the crab until editing this photo ! 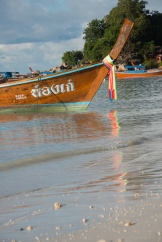 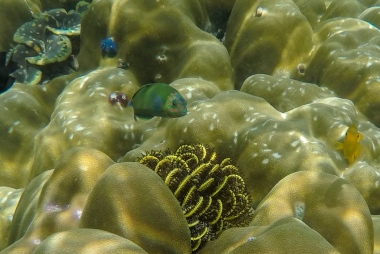