Another catch-up post ! As I mentioned last time I have not had time to download a lot of photos from my camera because of personal stuff requiring a trip out of town recently, so I had many photos to sort through.

These are from the Bangkok Motor Show held out at Muang Thon Thani early this month, supposedly the biggest and best auto show in SEA, but I’ll take that with a grain of salt.

Before the show started Big Brother at the Ministry of Culture had urged the car companies and the “pretties” to dress in a more traditional Siamese way, and not to wear anything too revealing.

As most Siamese women customarily went topless or just with a loose scarf slung over the shoulder until the 1930s, when the Prime Minister of the time mandated that everybody should be “civilised” and wear western dress that could have been interesting !

As it turned out nothing much changed, there was still the usual number of girls draped over the cars and motorcycles with what was probably silicone enhanced cleavage on display, especially with the motorcycles and audio equipment stands. 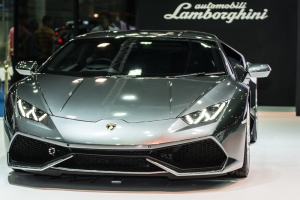 Who needs sexy girls when you look like this ?

The upmarket manufacturers such as Rolls-Royce and Lamborghini did not need to use such tactics, their vehicles attracted enough attention on their own.

Their models were classy, not trashy … 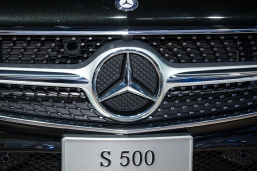 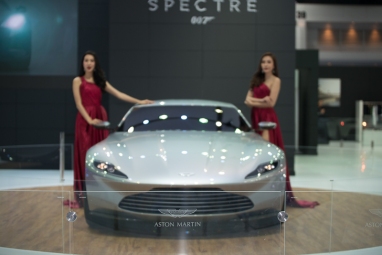 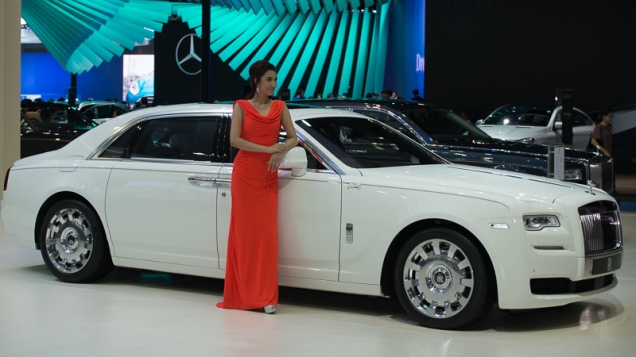 Once again there were several motorhomes and caravans on display, and being sold, yet you never see them on the road here in Thailand. No, actually I have seen one motorhome on the road, but never a caravan.

But there plenty of more reasonable deals on offer too, not that I plan on buying a car here anytime soon.

Also lots of motorcycles on show, big and small :

I don’t know if the Minister of Culture would be happy with these :

But I bet he would not have approved of the Audio Show outside the main hall : 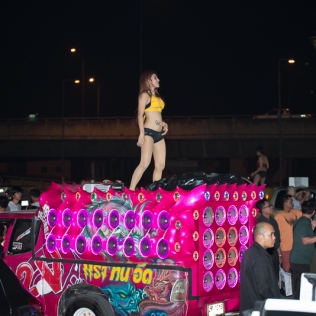 He would not have liked the way the coyotes dressed or danced, nor would he have liked the “music” played by about 20 modified sound trucks, each with at least one girl dancing on top. It was deafening !!

A recently retired "Baby Boomer" , looking forward to having more time for my photography and travel.
View all posts by Mike →
This entry was posted in Events, Photography, Thailand and tagged bangkok, coyote, girls, models, motor show, Thailand. Bookmark the permalink.