This part is actually inside the elephant, but unfortunately there are no windows to see out over the gardens.

The gardens naturally feature many more elephants, in various sizes and colours. 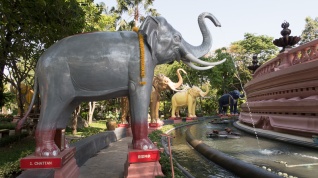 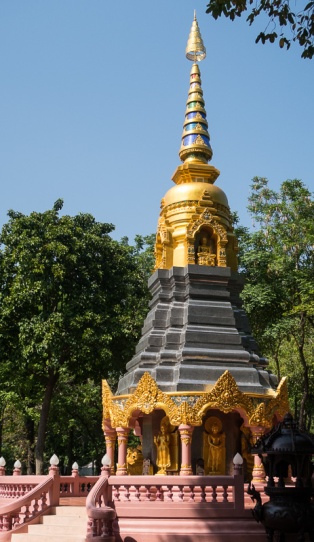 One story I read says that when planning the nearby ring road the government was going to go through this garden, so Lek Viriyaphant dedicated it to his Majesty the king, making it untouchable. However the govt. changed the plans and put the road through his house next door !

How to get there ? The Erawan Museum is on Sukhumwit road, so many buses go past it. The 511 is an air-con bus that goes right across town and out to Samut Prakan so that would probably be best. The BTS Skytrain will be ( should be !) extended out there by end of 2018, currently you would have to get off at Samrong and then get a short taxi ride or bus. Note that some buses detour via the expressway when returning to the city so a return via taxi and BTS might be best.

How much ? It does have the foreigner surcharge, so a normal walk-in ticket is 400baht/adult which is a bit pricey, but booking online will get you a hundred baht discount. If you are an expat with a Thai driver’s license, flash that and get the Thai price of 200 baht.

A recently retired "Baby Boomer" , looking forward to having more time for my photography and travel.
View all posts by Mike →
This entry was posted in Explorations, Thailand, Travel and tagged bangkok, double pricing, Erawan Museum, Thailand. Bookmark the permalink.

2 Responses to The Erawan Museum