Land of a million elephants !

The girlfriend and I have recently come back from a couple of weeks in Laos, taking advantage of some cheap air fares from Bangkok, and some good hotel deals. Of course, there is always a reason behind those good deals …in this case Air Asia wanted to fill planes and the hotels wanted to fill rooms during the rainy season ! So the weather was not the greatest for sightseeing, but we have both been to Laos before so at least it was a getaway from Bangkok.

We started off in Luang Prabang, staying at the Villa Somphong. Luang Prabang used to be one of the extreme outposts of the French Empire, attracting many people who wanted to get away from Paris for one reason or another. There are still a lot of old villas left from that time, often renovated into boutique hotels. We had a nice room with a balcony looking out over the river, and close to the town centre.

Luang Prabang is well known for the number of wats (temples) there, and the number of monks. The morning tak bat (alms giving) has turned into a bit of a tourist cliche, one of the must-dos for the backpacker set. Living in Thailand as I do, it’s not exactly a novelty to me but I must confess I went along early one morning to take a few photos. 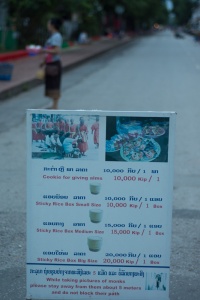 By 6am vendors have their spots staked out, with places for their customers to sit, baskets of cookies and sticky rice for sale. Every vendor had the same items for sale, so I hope that the locals who give alms do give them something healthy to eat instead of the cookie bars sold to tourists. Apparently the sticky rice sold by the vendors is low quality, I do know that much of it got thrown away ! The monks also give some of their excess food to local kids waiting around the corner. I would suggest that if you do want to give alms that perhaps you go down to the market and buy some fruit or anything else healthy.

Some more photos from Luang Prabang, click to see a larger version. 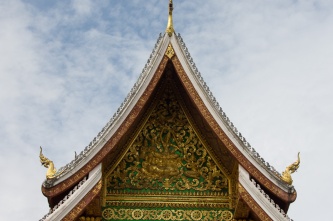 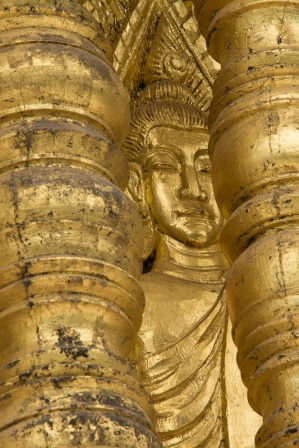 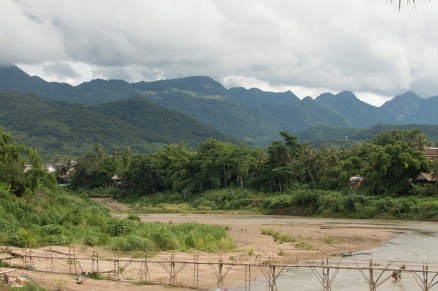 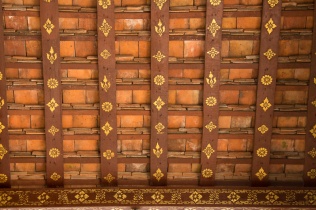 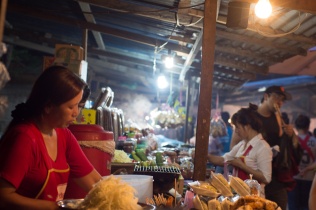 After a few days there it was time to move on to Vang Vieng. I had avoided this place before because of it’s reputation on the backpacker circuit, not my scene, but now that most of the more notorious stuff has been closed down I thought we could spend a few days there, hoping to do one of the ultralight or balloon flights over some spectacular scenery.

It was not to be, with low cloud and drizzle for the next few days. We stayed at the “Elephant Crossing Hotel”, I really cannot recommend this place ….switches and light fittings loose and falling out, the bathroom drain must be partly blocked, and the wifi is iffy ….off and on regularly. Guess it serves me right for believing the pics on Agoda !

At least it also had a nice balcony to watch the river flow by …..

With the dreary weather Vang Vieng was a bit of a letdown, maybe I’ll go back at a different time of the year and try again.

Then on to Vientianne, again. I’ve been there several times before on visa runs and holidays but not for a couple of years. In that short time the city has changed quite a bit, it’s almost up to the 21st century now ! We got very lucky with our hotel here (the Sengtawan Riverside), we had just got up to our room, the GF was smiling at the big size of it, when reception rang …”we have to change your room, sorry’ …..so we go up to our new room and find a huge suite. It was twice the size of our condo ! Apparently they needed all the rooms on the other floor for a tour group the next day so upgraded us. I certainly was not complaining.

This is half of a HUGE bathroom !

And naturally it had a private balcony looking out over the Mekong.

In the evening there were many open air restaurants on the riverbank outside, so we did not have to go far to eat. The hotel also had it’s own restaurant on the top floor but we only managed breakfast there.

Some more photos of Vientianne : 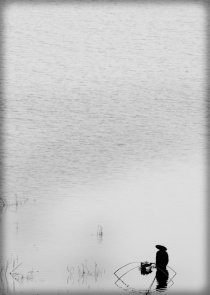 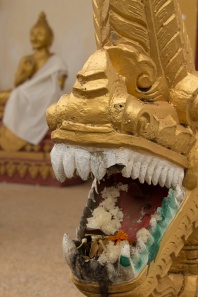 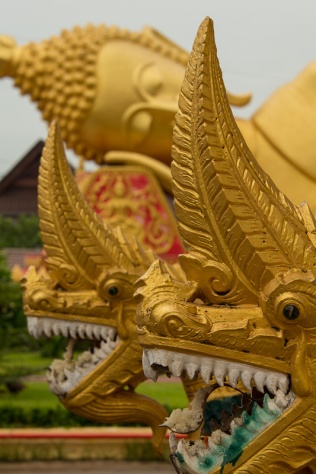 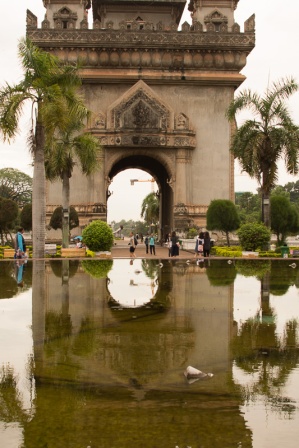 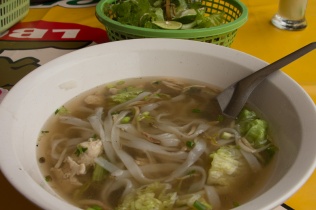 For anybody visiting Vientianne in the near future, Pha That Luang  is under renovation at the moment and much of it is cordoned off, and the Buddhas moved out. So it is not really worth the 10,000 kip to get in, even though they are still charging full price with nothing to see. Not that I actually paid it anyhow ……after queueing up behind a bunch of chinese tourists  for ages we just went around them and the guards said nothing 🙂

The surrounding temples are free and still open so it is worth a trip out there. But haggle with your tuk-tuk driver ! By this time I was a bit tired of having to do all the organising so I made the GF get the tuk-tuk out to Patuxai, for which she (too) quickly settled on 60,000 kip. I got us from Patuxai to Pha That Luang, wait for nearly an hour, and then all the way back to the hotel for only 80,000 ! She also paid over the odds for a t-shirt in Luang Prabang 😦

And then it was back to Bangkok, and a horrendous one hour queue at Don Mueang airport Immigration ! I really do wish our Chinese friends would learn to fill in the arrivals card before they get up to the desk instead of holding everybody up.

As Air Asia say …..Now everybody can fly ……but sometimes I think that some people should stay at home.

A recently retired "Baby Boomer" , looking forward to having more time for my photography and travel.
View all posts by Mike →
This entry was posted in Laos, Photography, Travel, Travel and tagged Laos, Luang Prabang, Vang Vieng, Vientiane. Bookmark the permalink.

2 Responses to Land of a million elephants !