My brother and sister, with their respective spouses, were in town recently en-route to Laos, stopping over in the Big Mango for a few days. While here, the guys had a boys night out at Rajadamnern Stadium, watching the Muay Thai fights. While I am not a die hard fan of the sport I often went along to the fights at MBK on Wednesday nights, but they have been discontinued.

It’s a long time since I have been to Rajadamnern Stadium, as it is not the easiest place to get to (unless you are staying near KSR).

From their hotel near Asoke we had to get a long slow taxi ride through peak hour traffic. Our taxi driver turned out to be an ex-boxer himself, and after the usual “where you come from” questions I found out that he happened to come from a village just down the road from my girlfriend’s home. He originally wanted an exorbitant off-the-meter price which I negotiated down to something reasonable, only for the brother in law to later pay and tip him more than he originally asked for  ….. **** tourists !

The guys wanted to sit ringside, so I booked our seats online and got seats right alongside the red corner, at 2000฿ each . The cheapest seats, way back in the third tier, are listed as 1000baht online, somehow I think that is a “special” price for people with white faces ….I’m sure the locals don’t pay anywhere near that. I don’t think that management would want you to stand up there with all the illegal gambling happening around you 🙂 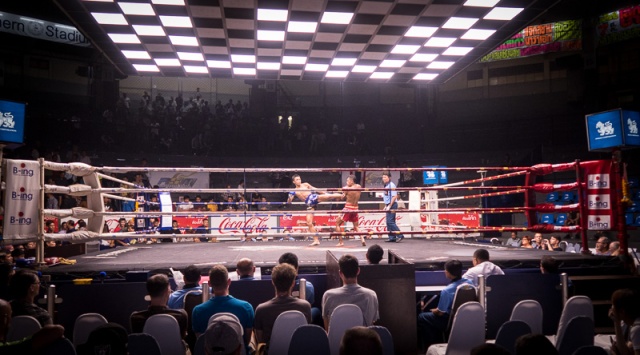 2000 baht ringside, much cheaper behind the wire mesh on the upper levels.

I don’t think the fights on that Monday night were of the best quality but it was entertaining enough for my brother and brother-in-law. The crowd and the boxers’ supporters do get involved, and make for a good crowd atmosphere. 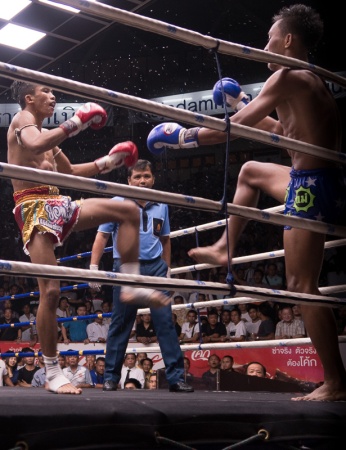 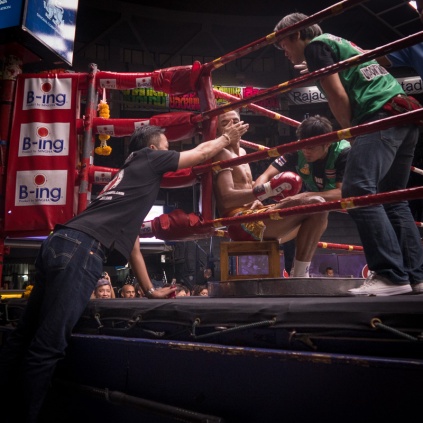 “Wai Kruu” …paying respect to trainers and the sport.

Part of the pre-bout “wai kruu” 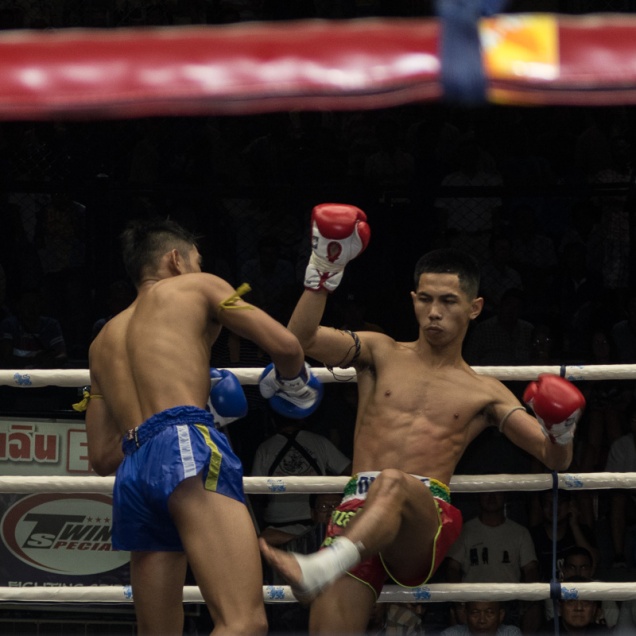 Although the ringside seats are good for atmosphere they are not the best for photography as the ropes get in the way. At MBK I used to be able to stand right next to the ring and shoot through the ropes, at Rajadamnern you might be better off getting into the second class area so that you could shoot down onto the action.

I only took my little compact camera so I had to stick down close to the ring. 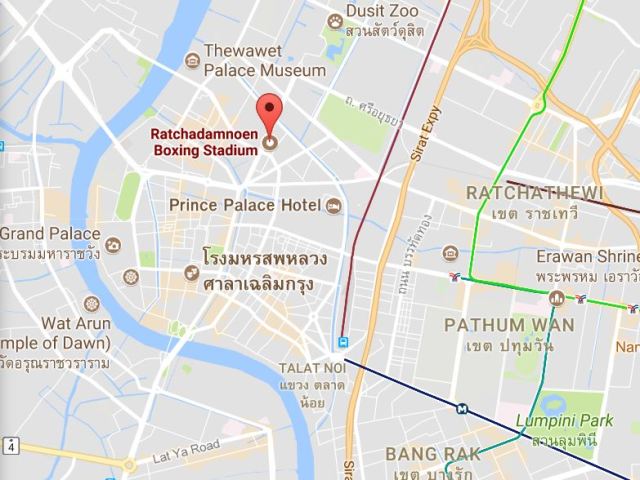 Rajadamnern (or Ratchadamnoen) Stadium is the oldest muay thai stadium in Bangkok, opened way back in 1945, so not surprisingly it is in the old part of town. Rather than the long taxi ride we had, probably the best way for most tourists to get there would be either MRT subway to Hualamphong or BTS skytrain to National stadium or Phayathai stations and then a relatively short and quick taxi ride. If you are staying in the Khao Sarn Road area it is just about walkable.

Fights are on at 6.30pm Monday, Wednesday, Thursday and Sundays. Other nights they are at the new Lumphini stadium, way out in the north of the city.

Tickets can be booked online at http://rajadamnern.com/ but unless you want to get absolutely ringside it’s usually not really necessary to book ahead for most nights. Even if you are not a fan of the martial arts the whole experience of a fight night at Rajadamnern might make it worth the trip ?

A recently retired "Baby Boomer" , looking forward to having more time for my photography and travel.
View all posts by Mike →
This entry was posted in Events, Explorations, Photography, Thailand, Travel and tagged bangkok, Muay thai, Thailand. Bookmark the permalink.