After a couple of days resting to get rid of the jet lag (yes, even in business class !) and catching up with friends here in Bangkok it was time to start looking for somewhere to live. I had already narrowed the area down where I wanted to live. It had to be close to either the “Skytrain” (elevated light rail) or the MRT underground routes for ease of getting around without any of the hassles of Bangkok traffic. It had to be reasonably close to the farang (westerner) district of lower Sukhumvit road, but not too close. On Nut fitted the requirements, so that’s where I settled on …. easy part done !
There are 2 ways of apartment hunting here in BKK …use an online agent, or pound the pavement. I took the “easy” way and looked online, found some potential places and rang up the agents. A couple never answered the phone, another promised to get back to me but never did, one listing was completely out of date, and another just wanted to sell me a place ! The remaining 3 agents had nothing suitable listed, so it had to be the old fashioned way of knocking on doors. Most apartments in BKK have an office in the complex, so you just find a likely looking building and ask if there are any vacancies.
It’s the tail end of the hot and wet season here at the moment, so a couple of times I had to head for shelter before a tropical storm drenched me, which made the search a bit longer. But after a few days I found somewhere suitable …200m from a Skytrain station, with a supermarket and shops just a bit further away, well within my budget at 13000 baht/month.

So what do you get for 13000 baht/month, or just under $AU440 ?
You get a smallish place of 35 sq metres, which is about average for a modern 1 bedroom apartment in Bangkok, but with more storage space than many older and bigger places here. I don’t think there is any wasted space here.
The bedroom has a small desk built in, with a (slightly worn) office chair included. The bathroom is small, that is one room lacking in storage ….a small cabinet would be nice. The kitchen area is small too, but many older apartments don’t even have a kitchen space. 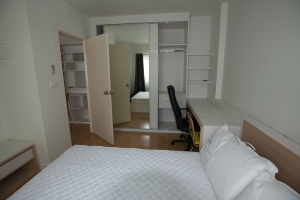 It comes with fridge and microwave in the kitchen, air-con, pillows and mattress in the bedroom, large screen TV and another air-con in the living area. Cable TV is included in the rent, about 70 channels including 7 English language ones. There is a small fitness room downstairs, with exercise bikes, treadmills and free weights, and a coin operated laundry room at 20 baht ( $AU0.65) a load. And free wifi in the lobby area too.

Every decent apartment complex comes with security guards, this one is no exception. Every time I walk over the road to the 7/11 they jump up and give me a big salute, and same again when I come back a couple of minutes later ! If I’m going down the road to the supermarket they want to hail me a motorcycle taxi, even though it’s only a couple of hundred metres away. They take the ID of everybody coming in, so I think I’ll be safe and sound here!
I’ve seen about 6 or 7 other farang in this complex, and several more in the area, but it is still mainly a Thai area so everything is cheaper here than it would be around lower Sukhumvit. At the end of the soi (sidestreet) is a night market, with many food stalls with food from less than 2 dollars, cheaper beer and nightly entertainment in the beer garden, and a guy who makes the most yummy smoothies I’ve had in a long time for just over a dollar. And if I get desperate, there is a Macca’s over the road which is also cheaper than in the tourist ghettos ( a Big Mac meal is 148 baht, approx. $5, compared to 158 on lower Sukhumvit), and KFC, and other fast food chains.
There is no danger of going hungry here in Bangkok !
Some more pics of the apartment for now, and more to come soon on the neighbourhood.

A recently retired "Baby Boomer" , looking forward to having more time for my photography and travel.
View all posts by Mike →
This entry was posted in Expat life, Food, Random musings, Thailand and tagged apartment hunting, expat life, neighbourhood, Thailand. Bookmark the permalink.